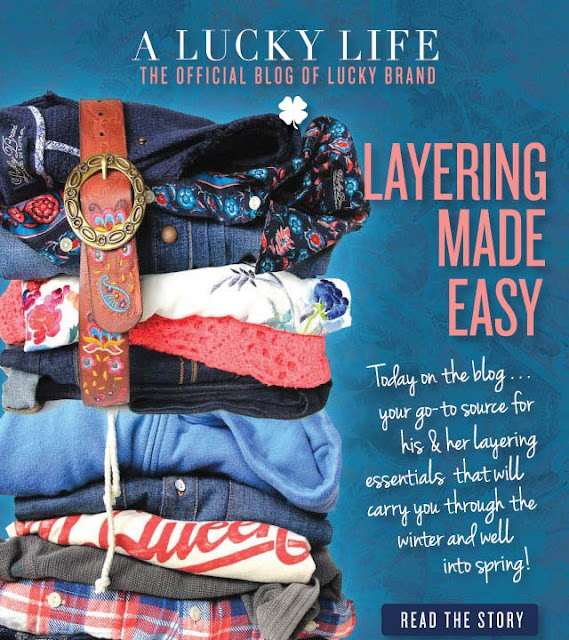 From timeless classic cuts, to perfectly on-trend shapes, Wallis has stand out pieces to take you from day to night. Whether you are channeling rock and roll chic or fashion forward maven, sleek shades of red and black with a touch of gold will bring out your inner diva.

Shop for these styles at www.wallisfashion.com
- December 21, 2012 No comments:

Jessica Alba was spotted wearing Level 99 earlier today! The stylish actress/entrepreneur looked festive and fun in her Selvedge Relaxed Lily's on her way to lunch with friends in Beverly Hills. Earlier this week, fellow fashionista, Ashley Madekwe, blogged about the same pair of jeans, which are also a favorite of Sarah Jessica Parker($160; www.level99usa.com)!

Let loose and go wild this winter with the ethically made Noche Tuscana Faux Fur Scarf from Accessuri! A departure from the standard neutral fur color palette, this icy blue scarf is wildly hot! With a portion of each purchase from Accessuri.com donated to the DNA Foundation to help mitigate human labor trafficking on a world-wide scale, Rachana Suri, founder and CEO of Accessuri, allows the trend-savvy fashionista to stay glamourous while creating a positive social impact. Be a mindful consumer and make a fashion statement with Accessuri! 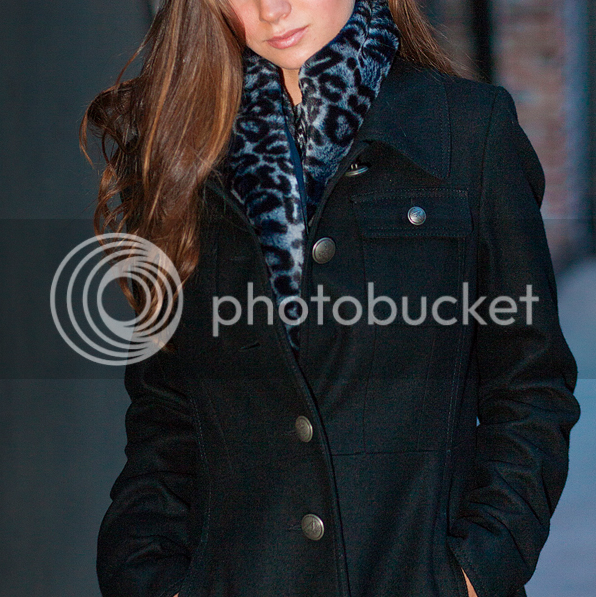 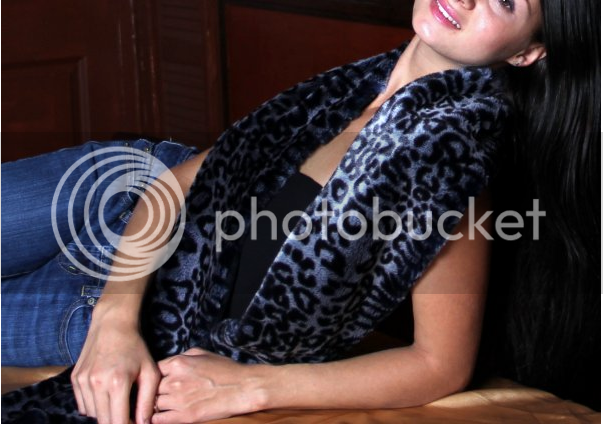 
Accessuri’s line of scarves, wraps and stoles are each handmade in the U.S. using faux furs and fabrics of wool and silk. The company’s mission is to leverage its fashion line to help mitigate human labor trafficking globally, allowing you to be a part of of positive social impact while continuing to lead a stylish, and guilt-free lifestyle. Suri has harmoniously blended faux-fur luxury fashion with an environment that supports positive social impact, where laborers are being paid a fair wage for their serives, where communities are prospering, and where the injustice of human trafficking is highlighted and every day purchases are turned into powerful tools that will ultimately change the world for the better.
- December 19, 2012 No comments: 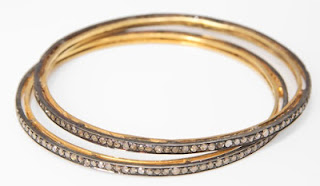 Charlize Theron was spotted wearing her Level 99 jeans at the movies with her mom this weekend! After several months of shooting Mad Max: Fury Road in Africa, the actress resurfaced in L.A., looking chic in her Janice Ultra Skinnies in Helium Blue ($90). Both Isla Fisher and Jennie Garth were photographed in the exact same jeans just a few months ago! 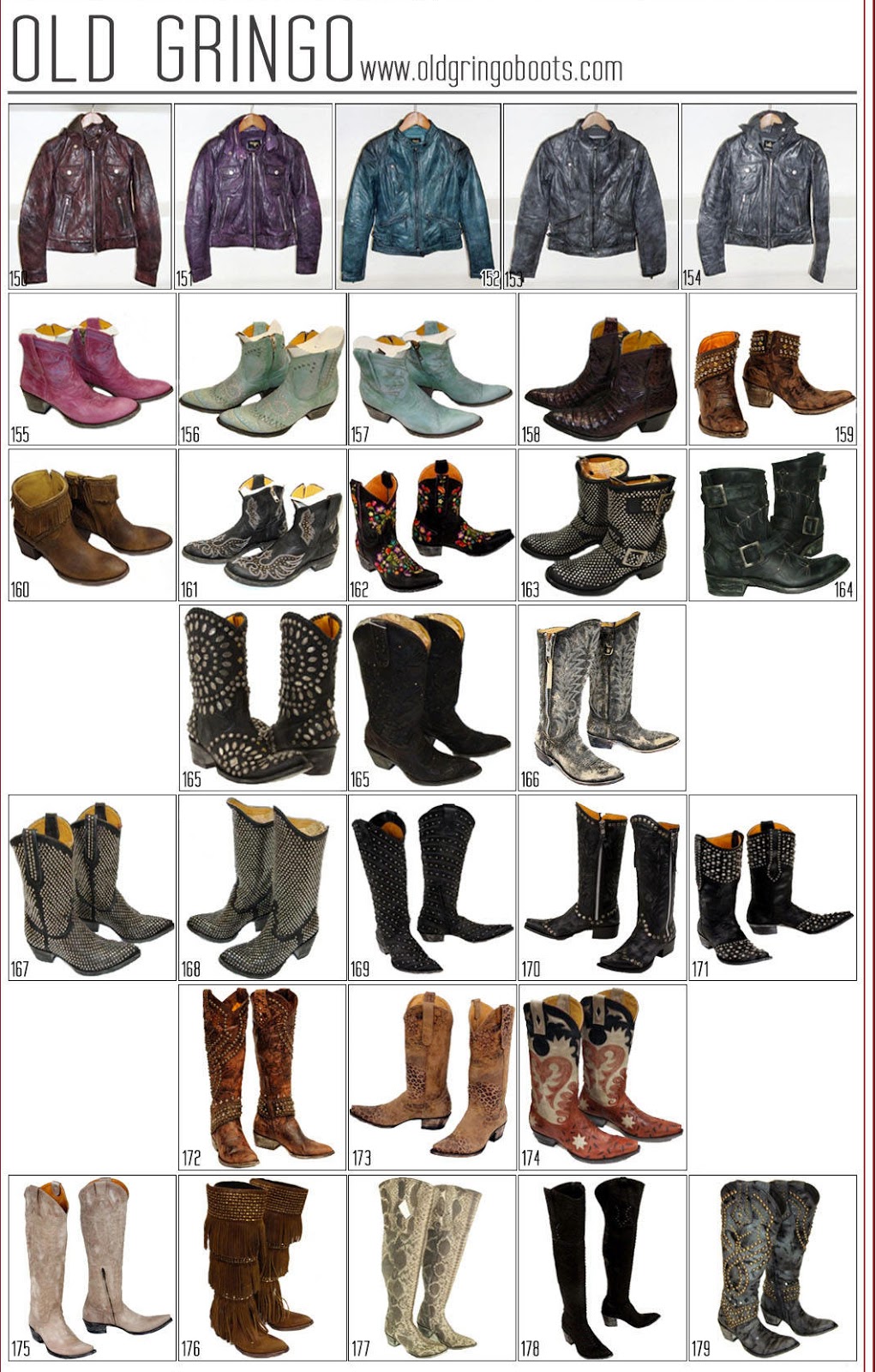 Learn more about Old Gringo boots and jackets at their website.
- December 14, 2012 No comments: 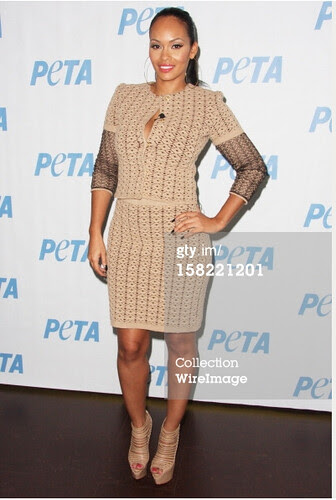 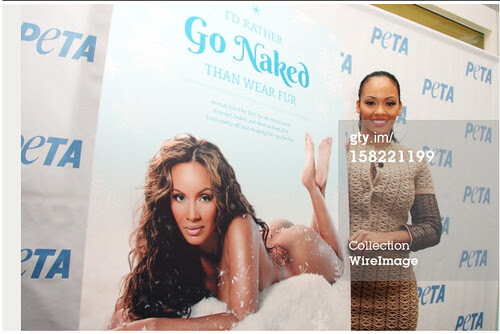 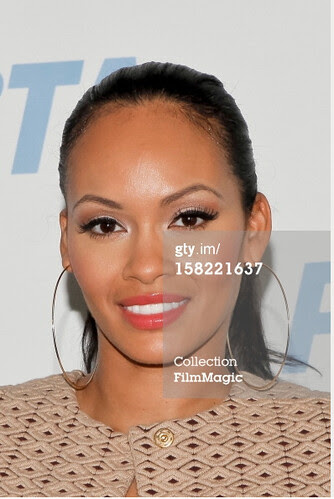 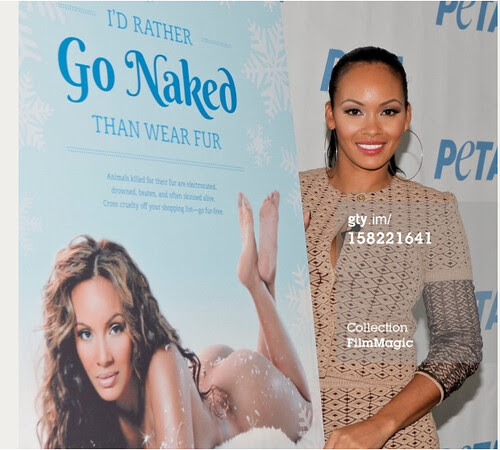 Reality TV personality Evelyn Lozada looks gorgeous wearing Ekaterina Kukhareva (www.kukhareva.com) to the unveiling of her first ad for PETA's "I'd Rather Go Naked Than Wear Fur" campaign. The stunning starlet said she stopped wearing fur after researching what animals go through in the name of fashion, and encourages everyone to do the same. Though nude in the winter-themed ad, the animal lover opted for a chic and sophisticated jacquard skirt and top from London-based designer Ekaterina Kukhareva at the unveiling.


WHAT: The TV personality wore: 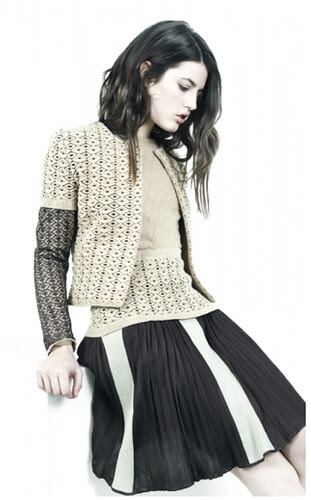 
Ekaterina Kukhareva is a Ukrainian born designer based in London. She is becoming well-known across the world for the beautiful handmade details of her intricate knitwear, that is both timeless and sexy. Specializing in macramé, fringing, crochet, and beading, Ekaterina's brightly hued luxurious knitwear emphasizes the beauty of the female body, Ekaterina draws inspiration from her Russian roots as well as world history. Particularly moved by the queens of previous eras, Ekaterina's collection is made for the modern woman who is powerful, adventurous and enjoys standing out from the crowd.
- December 14, 2012 No comments: 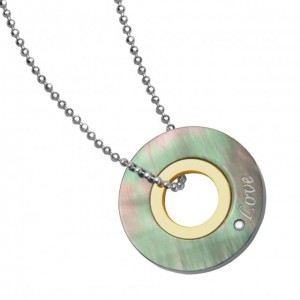 As an artist, sculptor, philosopher and jewelry designer, Mary Margrill says her designs are “inspired by the human need both to adorn and to communicate.” Which, in this holiday season, is exactly what one looks for in a personal gift.
A perfect example is this updated version of the classic circle pendant. Rendered in 14K yellow gold, sterling silver and grey mother of pearl, the pendant expresses the greatest gift of all: love. To top it off, Margrill places a diamond next to it.
Margrill describes her designs as being “sublimely steeped in spirituality,” mixing ancient and contemporary symbols of spirituality, religions, and inspirational messages with feminine, wearable designs.
If you happen to visit the Minneapolis Institute of Arts, be sure to take a look at Margrill’s “One World” diamond encrusted necklace featuring symbols of the world’s most recognized religions. This ultimate example of Margrill’s spiritually-infused designs is on view in the Faith in Motion gallery through July 31, 2013.
Suggested retail: $340
- December 10, 2012 No comments:

“One World” necklace BY MARY MARGRILL highlights world, faith and religion for “Faith In Motion” exhibition

Mary Margrill, an artist, renowned jewelry designer, and philosopher who's work is sublimely steeped in spirituality has accepted an invitation from the prestigious Minneapolis Institution of Arts to exhibit her diamond encrusted “One World” necklace as part of the “Faith In Motion” gallery event. On display until July 31, 2013, the “One World” necklace will add an ethereal feel and altruistic message. Margrill creates a delicate reflection on some of the world's most recognized religions through iconic symbols and enchanting diamonds. The defining character on this whimsical yet powerful piece is the peace-sign clasp -- a metaphor that easily speaks for itself.

Mary Margrill's handmade necklace unites symbols of seven world faiths in 14K white gold and 2CT total weight of white diamonds. The “One World” necklace is valued between $16,000 and $20,000 USD and is available for purchase upon request by request through www.marymargrill.com.

The injection of Latin American culture and & Asian aestheticism breathes boldness and flair into everyday basics. The 2013 collection fantasizes as a bohemian romance with effortlessly transitional garments for day and night. Fernandez infused basic hues of black, white, gray and khaki with the coolness of pinks, oranges, yellows and floral prints. Traditional silhouettes of a less structured fit; however, each garment is infused with the brand’s novelty of simple and sharp pieces.

All fabrics are selected for its appeal, comfort and preservation in mind. Cotton, jersey, silk and microfibers are the foundation for garments, while lace, fine gauze, chiffon, tencel and tulle are frequented for Filomena Fernandez’s most elegant pieces. Embellishments range from crochet and embroidery to pleats. Lace is a common feature, as it lends a romantic touch to classics.

Filomena Fernandez, a woman’s apparel brand founded by Maritza Fernandez, is a collection of garments inspired by Latin American and Asian cultures. The injection of cultural influences including deepened femininity and minimalism results in a women’s wear line that is at once practical and wearable. A fresh approach to the reinvention of everyday basics is enveloped in a distinctively laid-back yet modern look. Filomena Fernandez’s first outpost is located in Coral Gables, Florida.

The presentation of originality and flair is created with the utmost attention to detail to make a woman feel confident and refined. Each garment is carefully crafted to ensure comfort, durability and most importantly, ease in maintenance. Filomena Fernandez features the fundamentals of fashion with loose-fitting knits, wide-leg trousers, slouchy shirts and whimsical peasant-style blouses. “I believe that extra room in garments positively works in two fashion techniques,” explains Fernandez. “One, looser clothing produces a thought of ‘what’s under there’ from onlookers. It’s sexy to make one wonder. Secondly, a generous fit provides great elegance – with the way a garment flows to how it molds the body in a way without completely embracing it.”

The decidedly minimalistic designs – clean lines fluidly captured throughout each collection – are inspired by Fernandez’s four-year tenure in Tokyo and the consumption of the Asian aesthetic, rich culture and purity of life. All fabrics are selected for its appeal, comfort and preservation in mind. Cotton, jersey, silk and microfibers are the foundation for garments, while lace, fine gauze, chiffon, tencel and tulle are frequented forFilomena Fernandez’s most elegant pieces. Embellishments range from crochet and embroidery to pleats. Lace is a common feature, as it lends a romantic touch to classics.

The 2013 collection fantasizes as a bohemian romance with effortlessly transitional garments for day and night. Fernandez infused basic hues of black, white, gray and khaki with the coolness of pinks, oranges, yellows and floral prints. Traditional silhouettes of a less structured fit; however, each garment is infused with the brand’s novelty of simple and sharp pieces. At the affordable price of $150 - $350, top sizes include small, medium large or 0 to 12; pants are available in American sizes of 0 to 14.

Enzoani is scheduled to release Timeless, a viral commercial, debuting the 2013 Enzoani Collections on December 10th. The video will be hosted on Enzoani’s website and is shot with the same technology used in films such as The Girl With the Dragon Tattoo and Peter Jackson’s The Hobbit.

“The video follows a young woman through several stages of her life from the early stages of budding femininity, culminating into the elegance of an Enzoani bride,” says Enzoani VP of Marketing Justin Nguyen. Her transition is complemented with a musical score produced by composer Giona Ostinelli, known for his work in projects such as Road to Perdition, The Campaign and NBC’S show Community.


The commercial is entirely shot in Ultra HD 4K RED Epic technology. Enzoani is one of the first in the bridal industry to use this technology for commercial use. Nguyen explains, “We pride ourselves for our impeccable quality and fast designs…it was only natural that we would produce Timeless with the highest quality of film technology available.”


To celebrate the release of Timeless, Enzoani will be hosting a month long contest running from December 10, 2012 to January 10, 2013 where one randomly selected winner will get to choose a dream gown up to $3,000 value.


Enzoani, a premier women’s bridal and couture fashion house, introduced its first blend of traditional and modern European influenced couture collection in 2005. The brand has since expanded to include Blue by Enzoani, lOVE (Special Occasion, Evening, and Shoes), and new for 2012, lOVE16, a collection for the adolescent fashionista. Enzoani also partnered with Modeca in 2011 to introduce their established bridal line to North America. Authorized retail locations can be found around the world, including North America, South America, Europe, Africa and the Middle East with new locations being added continuously. www.enzoani.com
- December 03, 2012 No comments:

Maria Menounos donned ban.do for the filming of Disney Parks Christmas Day Parade. The EXTRA star, who's co-hosting the annual ABC show set to air on Christmas morning, looked glam in her ban.do gold glitter headband ($12). Check out ban.do at The Grove in West Hollywood where they're showcasing Maria's ban.do piece plus exclusive holiday styles at their Designer Popcart (www.shopbando.com)!

Maria Tweeted a Pic of Herself in the same ban.do earlier in the day!

Isla Fisher was spotted on a family outing in London sporting the Lacoste Leren! This wedge desert boot blends fashion and comfort – the gum sole wedge provides comfort and traction while the burnished suede, knit detailing on the heel, and flattering height make this shoe wearable for everyday. 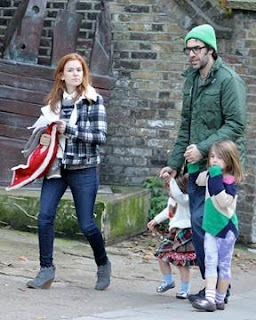 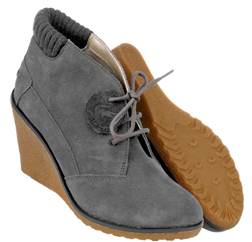 This wedge is the perfect gift for any gal in your life or just a treat for yourself this holiday season!

Each editor's picks will be featured in 480 Forever 21 stores across the U.S. through the holidays.